In BC’s Great Bear Rainforest lives a unique wolf that can swim more than 6 miles between forested islands in its hunt for nourishment. Its prey includes salmon, black-tailed deer, seals, clams and even barnacles. Fifteen years ago, two nonprofit organizations were a seminal part of research on these unique wolves; that partnership has since grown in unforeseen ways to protect wildlife, forests, and a First Nation’s culture.

People in Bella Bella, a Heiltsuk First Nation community of about 2,000 in the Great Bear, have known for a long time that there was a difference between swimming coastal wolves and wolves of the interior. But to wolf biologists outside Bella Bella, this sounded unusual and worthy of investigation: what could be learned about both wolves and BC’s Great Bear ecosystem? In 1999, Larry Jorgenson, who runs a nonprofit called Qqs Projects Society in Bella Bella, introduced a local Heiltsuk outdoorsman and archaeological technician – Chester Starr – to Chris Darimont, then a PhD student at the University of Victoria. Through his academic research and work with Raincoast Conservation Foundation, Chris and Chester set out to understand what resources this special population of wolves depend on and how logging affects the region’s predator-prey system.

Soon their team, guided by local knowledge, picked up hair and scat from forest trails that provided evidence that these coastal wolves are indeed a distinct genetic group. They also identified the resources and habitats that are key to their survival. By locating the denning and other important sites used by the coastal wolves, Qqs and Raincoast could identify areas that should not be logged. 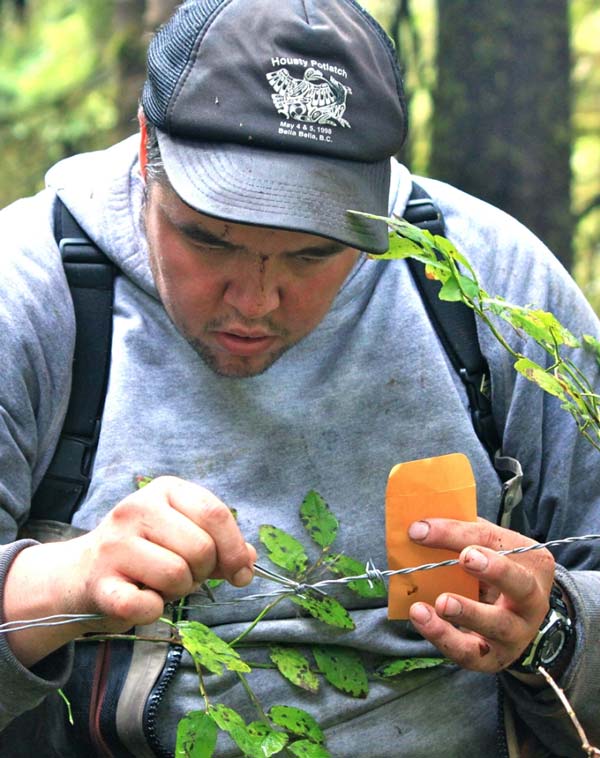 Qqs (which means “eyes” in Heiltsuk), undertakes projects that benefit youth, culture, and the environment working from the premise that the health of their community directly correlates to the health of their land and waters. Raincoast combines advocacy and peer-reviewed science to further conservation objectives for BC’s coast and the Salish Sea. After seeing the value of bringing together Indigenous knowledge and western science around wolf conservation, the two NGOs next turned their attention to bears.

Starting in 2006, Qqs staff and Heiltsuk youth set up bear hair snagging stations in the Koeye watershed, among the most important in Heiltsuk Territory. This early work inspired Raincoast to conduct complementary work – similar methods but applied at a coarser landscape scale. Now ten years later, researchers still set up and monitor non-invasive hair-snagging stations. These are areas of about 150 square feet each with barbed wire and scent them with non-reward bait. As bears investigate the corral, they leave bits of hair snagged on the barbs. These deposits are retrieved by Qqs and Raincoast teams, then labeled and sent for DNA analysis. There, the team analyze the samples to identify individual bears and describe population trends across the landscape.

“We’re stronger together; our partnership propels us further than either of us could travel alone.” – William Housty, Coastwatch Director of Qqs Coastwatch

By 2014, Qqs and Raincoast were able to identify 57 individual grizzly bears that use 69 square miles in the lower Koeye watershed — a statistic that exceeded their initial expectations of a dozen. It firmly established that Heiltsuk territory supports what Qqs has called “a grizzly bear highway.” The collaborative research also proved “deeply and mutually enriching,” says William Housty, Director of Qqs Coastwatch program and leader of the research teams. “It’s about more than just the science. We’re stronger together; our partnership propels us further than either of us could travel alone.”

Today, Raincoast undertakes bear research in collaboration with five Coastal First Nations: the Heiltsuk, Kitasoo/Xai-xais, Wuikinuxv, Nuxalk, and Gitga’at. With the Heiltsuk, Raincoast has also collaborated to quantify the effects that industrial-scale forestry can have on marine resources like salmon, which in turn support both bears and people. That information has guided local no-go zones for logging and wildlife management plans.

The partnerships have other threads, too. Raincoast provides hands-on science experiences for Heiltsuk youth aged 8 to 15 at the annual summer camp that Qqs organizes in the Koeye River Watershed. In turn, Raincoast volunteers learn about Heiltsuk culture and governance of local resources. In addition, Chris Darimont and Jess Housty, Director of Traditional Ecological Knowledge for Qqs, co-teach a University of Victoria field course on how to work together across cultures. The popular course helps students understand how scientists and policymakers can better integrate Indigenous knowledge and community-based approaches to conservation.

Relevance is at the heart of the partnership. Both Raincoast and Qqs bring knowledge, goals, and values that are relevant to and deeply appreciated by the other. Says Chris, “Qqs grounds us in Heiltsuk culture, reminding us that it’s not just about wildlife – it’s about people too. In fact, we cannot separate people, nature, and place.” Says Jess Housty, “Heiltsuk people have never held themselves separate from the lands and waters that sustain them, and we deeply value partners who are likewise willing to immerse themselves in the culture and nature that make our homelands so special.”

You can support our research and protect the coast by becoming a donor.