Human influences, inadvertent and intended, continue to threaten the survival of wildlife populations. Although rarely considered, habitat destruction, trophy hunting, and over-exploitation of food resources also cause suffering of individuals through displacement, stress, starvation, and reduced security. Yet the notion that animal welfare applies to wildlife has escaped most welfarists and conservationists. Consequently, a well-accepted and applied ethical foundation for animal conservation that considers animal welfare is necessary. 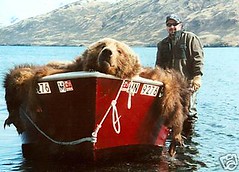 Emerging from Raincoast’s wolf project but present through all our programs, is the awareness that the welfare of animal habitats and their populations are closely linked to the welfare of the individual animals. We know that many individuals within disturbed wildlife populations endure suffering. Habitat destruction, for example, can deprive species of life requisites, cause pain, suffering, and even death.  Although less obvious, this equates to the harm caused by unregulated industrial farming. Both are justified by the supposed benefits accrued to humans.

Historically, concerns of animal welfare have only applied to animals under human care, such as farm, companion, or research animals. In our view, the extension to wild animals is conspicuously missing. At Raincoast, we work from the premise that the seemingly disparate world views of conservationists and animal welfarists are closely related.

This is why we practice non-invasive research. In part, it motivated us to examine the ecology of wolf diseases, some of which cause agony among infected individuals. Indeed, this ethic also motivated us to succeed at one of the most quixotic conservation ambitions of this century; we purchased and maintain a commercial hunting territory, an action that extinguished trophy hunting of carnivores over a massive portion of the Great Bear Rainforest.  At Raincoast, we actively encourage a ‘wildlife welfare’ ethic among our staff and other conservationists. We believe that the suffering wildlife endure because of humans is our collective responsibility and presents a moral imperative for conservationists and welfarists to carefully consider and act upon.

“Ethics in our Western world has hitherto been largely limited to the relations of man to man. But that is a limited ethic. We need a boundless ethic which will include the animals also… The time is coming when people will be amazed that the human race existed so long before it recognized that thoughtless injury to life is incompatible with real ethics. Ethics is in its unqualified form extended responsibility to everything that has life.” —  Albert Schweitzer, 1924