Fall was in the air and Raincoast’s wolf project was conducting a ten day expedition on our research vessel Achiever to collect genetic samples from areas on B.C.’s north coast in the vast area known as the ‘Great Bear Rainforest.’ Arriving after sunset, we anchored in a system known to us to be a wolf hot spot. I slept on deck up in the observation platform that was still attached to Achiever from our marine mammal surveys that had recently concluded for the season.It was still dark when the howl of a single wolf woke me up. I got up with my sleeping bag draped around me and crouched behind the blind of the observation platform, listening intently.

A cacophony of other voices then suddenly reverberated through the valley, almost as if in an echo chamber. Just as quickly the howling came to a halt. In anticipation I grabbed my binoculars. Then in the slowly advancing light of day the wolf family began to appear on the beach, one by one, then a pair at a time. The play and roughhousing of its younger members went on for a good part of the sun-drenched morning. 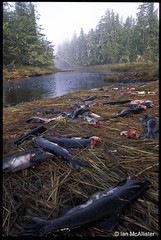 After the wolves had finished their romp I waited until they had retreated into the bush, then I hiked quickly up the system to where the salmon stopped spawning. All along the banks of the stream were headless pinks, the missing heads a telltale sign of wolf predation.  I watched as seagulls, ravens, and insects descended on the leftovers.  It was another reminder how wolves serve as providers to the larger ecosystem.

Soon it was time to get back to Achiever as tides and schedules dictated. As my jog back to the beach turned into a sprint, I marveled at the surgical-like precision the wolves exhibited in chomping the heads off of so many fish.

Coastal B.C. provides a landscape which facilitates a truly unique way of life for Canis lupus. Where else on the planet do wolves take to the sea, swimming among forested islands to feed themselves? Where else can wolves make more than 75 per cent of their living from marine resources like salmon, beached whales, and seals? Where else can we learn how these magnificent animals used to live, before the planet suffered extensive loss of wild wolves in most other places?

Our vision is to ensure that B.C.’s ‘Rainforest Wolves’ can continue their wild ways amidst an uncertain future marked by challenges against which they have no evolved defenses – climate change, industrial forestry, fisheries, trophy hunting, increasing marine traffic, exotic diseases, and others. We must consider carefully what wolves require in the face of these threats.

To that end, we continue to gain scientific understanding about the Great Bear Rainforest’s wolf population. Our research uncovers essential information, such as details of the evolutionary history of coastal wolves, that until recently had not been documented.

All of our work, led by Dr. Chris Darimont and Dr. Paul Paquet – two of the continent’s leading carnivore ecologists, goes through a rigorous and scholarly peer-review process, ensuring that our conservation recommendations are well grounded and defensible. We call this unique blend of academia and outreach as ‘informed advocacy’.

Along with humans, wolves were once the most widespread land animal on earth, but relentless persecution and the continuous loss of habitat now restrict wolves to only a small portion of their original range.

Chris Genovali is the Executive Director of the Raincoast Conservation Foundation